Following consultation with industry and approval from Ofcom, PhonepayPlus has confirmed its budget for 2013/14. We expect the total cost of premium rate services (PRS) regulation in 2013/14, covering PhonepayPlus’ core activity and the Registration Scheme, to be £4,066,632 excluding VAT (£4,301,849 including estimated non recoverable VAT).

During 2012/13, PhonepayPlus VAT-able services were subject to a review by HMRC. We were in constant contact with the ILP throughout this process to update industry of the result and the likely effects. This review has now been completed and has resulted in a change to PhonepayPlus’ VAT registration status. From the 1 June 2012 the levy and fine charges fell outside the scope of UK VAT, meaning that we can no longer charge VAT on the levy and we are unable to recover the associated input VAT. This change means that we now have to incur the added costs of VAT, an estimated £233,000 per year. In the short term we have been able to cover the VAT for 2012/13 but for 2013/14 we have had to incorporate these added VAT costs into our core budget and therefore into the levy. 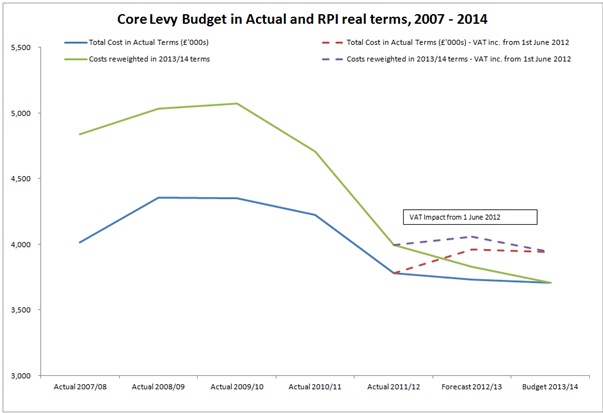 With the budget now confirmed, PhonepayPlus today announces the adjusted levy along with the fees for the Registration Scheme for 2013/14.

The revised levy and registration fee will apply from 1 April 2013.

PhonepayPlus’ adjusted levy for 2013/14 will be reduced to 0.39%. This adjusted levy applies to all outpayments payable by network operators to providers in respect of revenue generated by PRS. The PhonepayPlus levy is calculated as a proportion of every outpayment to ensure that PhonepayPlus continues to receive adequate funding to carry out its activities, as required by Section 121 of the Communications Act 2003. The budget for levy-funded activity does not include the costs of  the  industry Registration Scheme, as this is funded separately through registration fees. The registration fees and structure have also been confirmed for 2013/14 and are detailed below under ‘Registration Scheme structure and fees for 2013/14’.
The graph below shows the non-adjusted levy and adjusted requirement for the last few years. This non-adjusted rate would be the levy PhonepayPlus would need to raise if it did not receive any other income (such as fines, administration charges or bank interest). Although PhonepayPlus’ budget for 2013/14 has decreased, the predicted value of the UK premium rate market in 2013/14 has also decreased. This means that the non-adjusted levy will rise from 0.66% in 2012/13 to 0.74% for the coming year.

The adjusted rate is the amount PhonepayPlus is required to levy once the costs of regulation are offset by other income such as fines. A number of factors contribute to the calculation of the actual rate levied. Further information on how the PhonepayPlus levy is calculated can be found in our consultation document on our Business Plan & Budget. 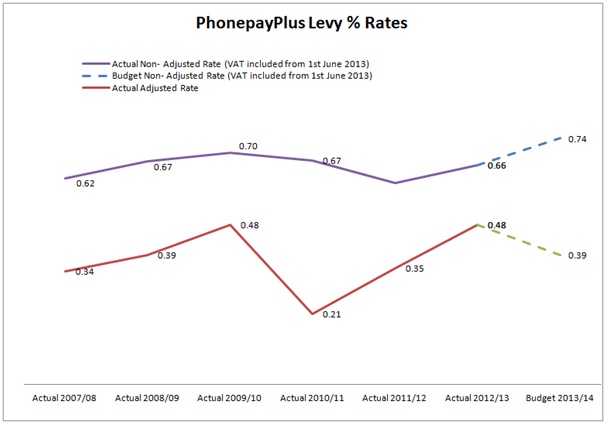 Registration Scheme structure and fees for 2013/14


The PhonepayPlus Registration Scheme was launched on 27 April 2011 and became mandatory with the publication of the new Code of Practice on 1 September 2011. Under the scheme all premium rate providers (including charities) must register with PhonepayPlus before providing a PRS, unless the provider solely operates 0871, 0872 or 0873 services.

PhonepayPlus is committed to reviewing the registration fee, fee structure and related exemptions in its budget each year.

With Ofcom’s approval of our budget for the coming financial year, PhonepayPlus can announce that the registration fee for 2013/14 will remain stable at £135 plus VAT for all providers unless they are eligible for an exemption.

Renewal notices will be sent to all providers in good time for them to renew their registration.

The registration fee will apply from 1 April 2013.

For more information on who is required to register and pay the fee, please see our Registration FAQs.

Arrangements as to the payment, adjustment and auditing of the levy are set out in Annex 1 to the PhonepayPlus Code of Practice.

Arrangements as to registration and the registration fee, including exemptions, are set out in paragraph 3.4 of the PhonepayPlus Code of Practice.

PhonepayPlus will shortly publish its full statement following its consultation on the 2013/14 Business Plan & Budget.